In 2020 I wrote a piece on here along with some maps showing 10km by 10km (that's 6.21 miles) city squares for places across Great Britain. I'm fascinated by the different forms and types of urban development we see on the ground, so I'm back for more - this time adding in blue and green to the grey of building footprints. You may even have seen my Twitter thread on this, but here I'm sharing some final versions of these grey-green-blue maps and also saying a bit more about what they actually are - and are not. But first, let's look at a few of the final map outputs for some interesting places. There are currently maps for 199 different places across Great Britain in the project folder. Sadly I don't have the data for Northern Ireland, otherwise I'd have included that too. 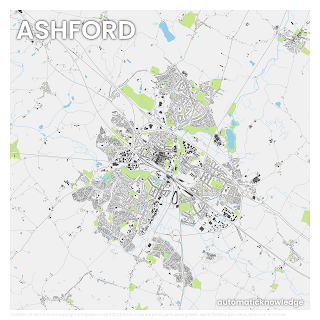 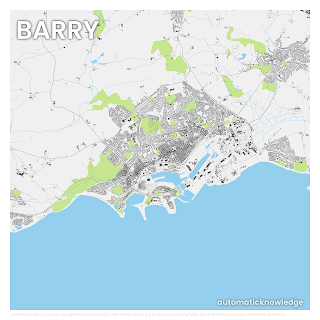 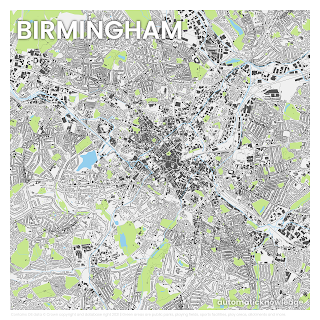 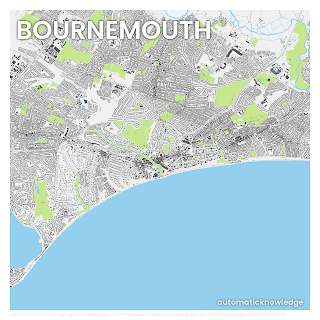 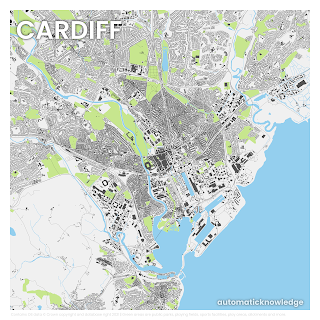 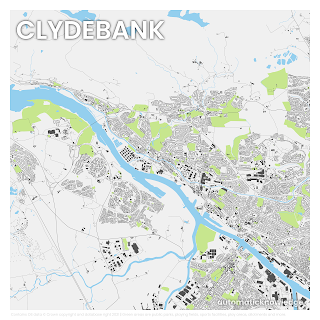 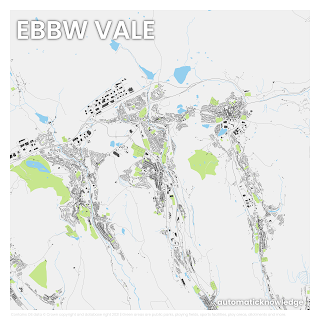 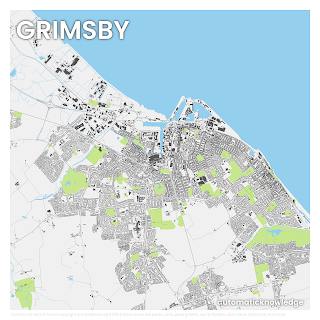 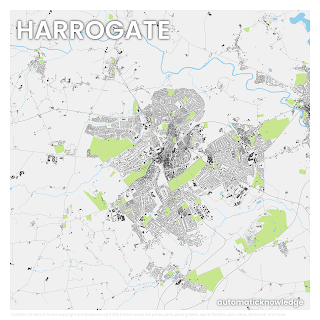 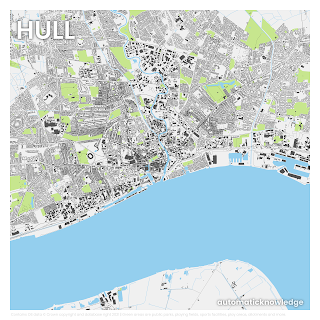 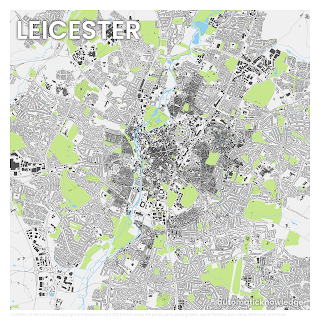 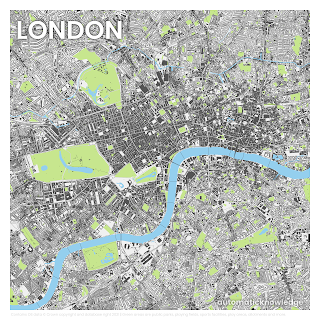 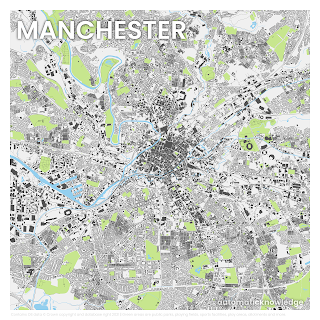 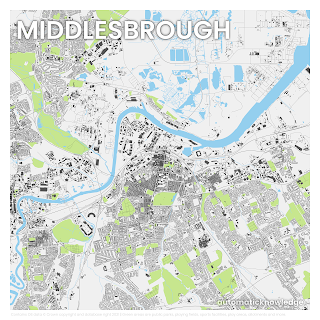 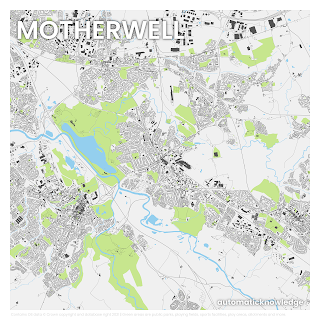 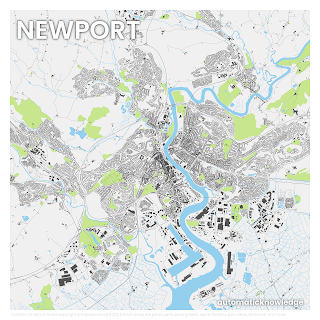 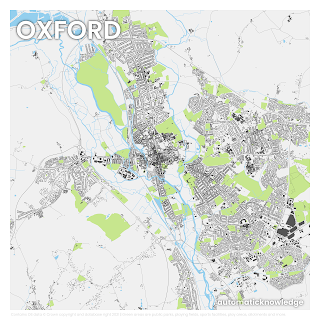 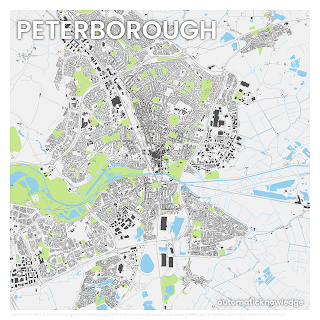 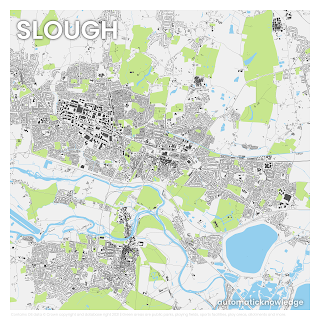 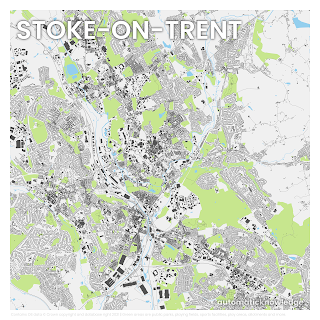 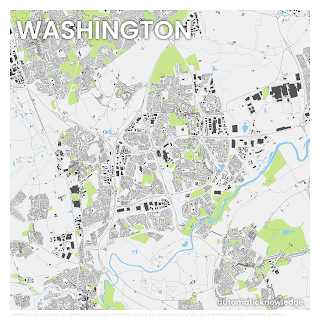 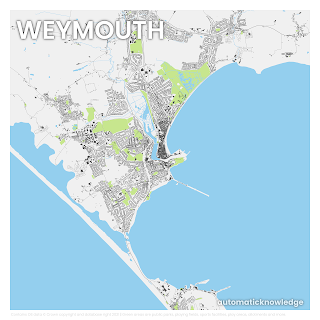 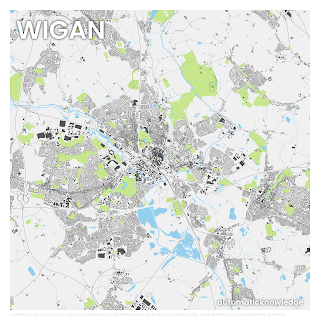 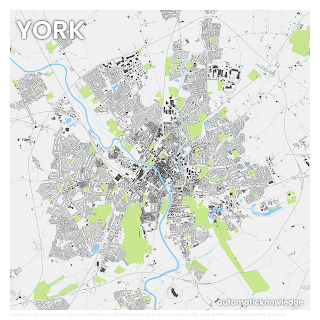 What are all the different colours?

The grey bits are buildings, roads and railways. The blue bits are surface water (lochs, lakes, ponds, rivers and the like) as well as coastal water. The green bits are less straightforward in that they do not represent every bit of green in a place - and are not intended to. They are the areas included in the OS Open Greenspace dataset from Ordnance Survey. You can read more about it on the dedicated webpage for it but in short it includes public parks, playing fields, sports facilities, play areas, allotments and more. So, things like some large green areas (e.g. national parks, gardens, and the like) are not green on these maps. What I am trying to do here is compare like-with-like across the country to examine density, the patterning of urban fabric, water coverage and a particular kind of green. Nothing too profound but something I find particularly interesting.

My town isn't included - you scoundrel!

I can in theory do this for about 43,000 places across Great Britain so if the place you want to see has been overlooked and is not included in the web folder then feel free to get in touch and I might be able to add it. Alternatively, strike me off your Christmas card list and consider me a non-person from this point onwards.

Can I print one of these and hang one on my wall?

Be my guest. I have outputted them at 300dpi (png files) so they should print at a reasonable size. I may yet add some to my print store but not sure yet.

How did you make these?

I downloaded the map data from Ordnance Survey and then put the layouts together in QGIS. I then automated the exporting of each map using the QGIS Atlas function. If you're desperately keen to learn how to do such a thing then I also do training on that. Once you get one layout set up, it's fairly straightforward to export a big batch, so long as your computer is up to it. See below for how they look in QGIS just before I export them.

Why did you choose 10km?

Partly because it's a nice round figure within which a lot of towns and central cities fit, and partly because 20km was too big and 5km was too small. I chose it through trial and error and it works reasonably well for most places.

That's all for now. Happy browsing.

This post has two main purposes. The first is to highlight the often weird and wonderful place names of Great Britain, including the village of Trumpet in Herefordshire, recently visited by my colleague Philip Brown - hence the title. The second purpose is to show anyone who is interested how to filter and find them using freely available Ordnance Survey data and free GIS software (QGIS). I'll start with a little bit of information about the data, then some maps of interesting place names, and then at the bottom I'll share more for any aspiring data boffins who might not yet know how to do this. I use these kinds of datasets in my QGIS training sessions, so that's the real reason I've been playing around with this stuff lately.

The first step is to grab Ordnance Survey's OS Open Names dataset - a free download, available in several formats, and no registration required. There are nearly three million points in this dataset (2,952,321 as of the August 2021 file) and for each point we have the name of the feature in English, plus Gaelic or Welsh where applicable. You can read all about it in the official user guide, but for now all you need to know is that for each point there is a column which tells us whether it's a populated place, transport node, landform, some kind of landcover (e.g. a forest), hydrography (e.g. a loch) or 'other' (e.g. a primary school). For this little blog post, I filtered the data so it relates to populated places only, and this gets us a total of 43,120 places across Great Britain. This is how the places are broken down by type in the OS Open Names classification

Right, let's try some maps of interesting place names now - I'll leave the labels on and messy, so you won't be able to see them all on every map but that's okay, this is just a bit of trivia.

Yes, you get the idea. I could go on forever but I won't - I'll just add a few more and then say a little about how to structure queries for this in QGIS. 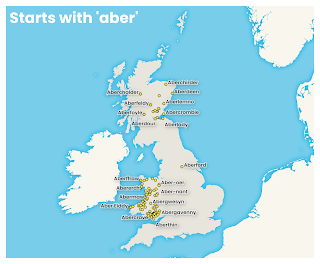 How to filter to find different places in QGIS

If you are a regular reader, or if you follow me on twitter there is more than a tiny chance that you might already be a bit of a GIS nerd, so this bit may be surplus to requirements. If not, and you want to know how to filter layers in QGIS, read on.
In the final map above I have shown places containing the word 'bottom', because I am very mature. To do this in QGIS, all I did was right-click the layer in the Layers panel, click Filter... and then enter the correct query into the Provider Specific Filter Expression box, as you can see in my screenshot below.
Here's the filter text, if you want to copy and paste it:
"TYPE" = 'populatedPlace'
AND
(
"NAME1" LIKE '%bottom%'
Explanation? There is a "TYPE" column and a "NAME1" column in the OS Open Names dataset so I've used these to filter the data to show only those places that are categorised as populated places, and only where the name contains the word 'bottom'.
On the last point, the LIKE operator looks for anything between single quotes - the % signs just ensure that QGIS finds anything with bottom, including anything with text before or after it. If you put in 'bottom' it would find only places called 'bottom', if you put in '%bottom' it would find only places ending in 'bottom' and if you put in 'bottom% it would find only places that start with 'bottom'. Note that you may read that the LIKE operator is case sensitive, but in my case I was using QGIS 3.16 and it was not case sensitive (I believe this is because only certain data types will require you to take case sensitivity into account - and in those cases you can just use the ILIKE operator).
Where you have variations of spellings, etc. then you might need to be a bit more creative - e.g. in the case of the 'st.' / 'st' / 'saint' map above. This was my query for that.
"TYPE" = 'populatedPlace'
AND
("NAME1" LIKE 'st. %' OR
"NAME1" LIKE 'st %' OR
"NAME1" LIKE 'saint %' )
One thing that can be confusing is how to search for text that contains an apostrophe, because if you just put one apostrophe between single apostrophes (i.e. single quotes) and % symbols then it won't work. The solution is to add two apostrophes, as below.
"TYPE" = 'populatedPlace'
AND
(
"NAME1" LIKE '%''%'
How about the hyphen-hyphen-hyphen one? Well, that goes like this:
"TYPE" = 'populatedPlace'
AND
("NAME1" LIKE '%-%-%-%')
If you just wanted to filter to show only places of your choosing, rather than filter to find some that contains certain bits of text, then it's just a case of using the IN operator and adding places in a comma separated list, in brackets, as shown below.
"TYPE" = 'populatedPlace'
AND
(
"NAME1"  IN ('Aberdeen','London','Southampton','Middlesbrough','Liverpool')
Slightly different example below, where I've filtered the OS Open Names dataset using a different data type so that I can show all the 'lakes' in Scotland.
"TYPE" = 'hydrography'
AND
(
"NAME1"   LIKE '%lake%' AND "COUNTRY" = 'Scotland'
Hopefully you get the idea - hours of fun, limitless possibilities for silly blog posts, but ultimately all this is actually very useful (as well as simple) and it's the kind of thing I do day-to-day in the course of my work.
Thanks for reading. 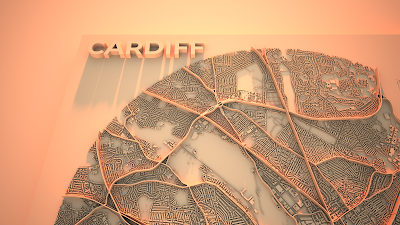 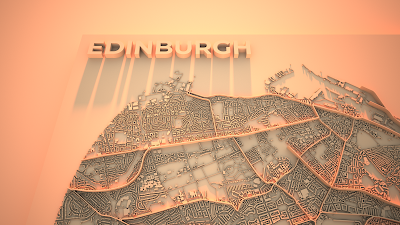 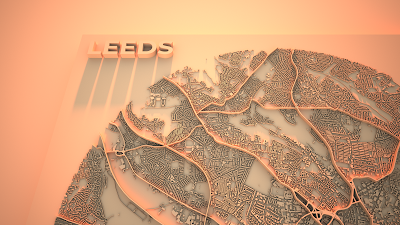