If you search online for 'world population by latitude' you'll quickly find quite a few results, including the great analysis by Bill Rankin on his Radical Cartography blog from 2008, which uses population from 2000, and also includes population by longitude. There's also a nice interactive version on Engaging Data, plus similar things on my One Degree of Population piece on here a couple of years ago and my global population density spike maps. In this post I look at world population by single degree of latitude using data from 2020. There are maps and stats below, but let's begin by looking at what appears to be some kind of alien eyeball but is in fact world population by single degree of latitude, where redder areas = more people at that latitude and bluer areas = less people. I used 2020 WorldPop data to do the calculations and all the maps were done in QGIS, as usual.

It's better viewed as a flat map, obviously, so I've posted that below. I've labelled quite a few places across the world and of course there are places at some highly populated latitudes that have very few people (notably the Sahara Desert) but you get the idea here: redder = more people at a given latitude.

If you view this image in full size you should be able to read the population numbers for each single degree of latitude - I've posted a zoomed in extract of this below. The most highly populated single degrees of latitude, according to my analysis? Here are the top 10 that I get:

And then down in 28th place we have the first entry in the southern hemisphere with 6-7° South having a population of 117.5 million people, according to my calculations.

It's difficult to do anything with this colour scale these days without bringing to mind Ed Hawkins' warming stripes, but I think it's useful to use the red/blue colour ramp here because the most highly populated places are generally the warmer ones and the colder latitudes on the whole have fewer people. But of course there's another factor here, and that is about where all the land is. So first let's look at land vs population and then we can look at a density version of the above map - i.e. population density by latitude that presents the stripes based on the population density of land at all the different latitudes.

You can do a little crossfaded gif to get the comparison between these two different elements, so that's what I did below. You can see it in the still images above, and in the gif below I have highlighted the single degree of latitude with most people and most land.

Let's hit pause on the gif, mid-fade, and then add some labels so we can make a bit more sense of what's going on. That's what I've done below - click to enlarge in order to read the labels. 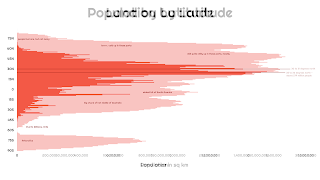 Here's another globe-style view of the population data but this time from a different perspective.

Okay, so the next three images are similar to the 'world population by latitude' image above but this time they are actually population density by latitude. That is, the redder latitudes are the most densely populated. I did this so that it only takes into account land, which is kind of where people like to live for some reason. You'll note in particular here there is a dark red stripe in the southern hemisphere that cuts across Santiago, Buenos Aires, Cape Town and Sydney, among other places. Note that I experimented by dimming and then removing the latitude colours over the sea in the second and third images because it kind of makes sense to do that.

Other odds and ends

Once I'd done this I experimented with different map projections and views, hence the weird population latitude eyeball at the top of the piece. I also experimented with views from above and from below, so you can see them below in the first two images. The first one in particular looks like a bloodshot eyeball to me.

What else? Well, I did a few other versions, including just coloured lines of latitude, then adding only land, adding a chart and that kind of thing so I've posted them below too. These are more experimental versions - some I like more than others but the one with just colours and land I think is quite interesting.

This all basically makes sense and is not particularly surprising but then again it's nice to be able to put some numbers to all this and make some maps of it. Plus it's interesting for training data and for working on map methods and techniques in QGIS.

Here's a screenshot of what this looked like in QGIS before I exported some of the final images. The font is Righteous, by the way.

So there we have it.