I haven't done a QGIS how-to blog post in a while, so it's time for another one because I'm working on a lot of training material right now. The end result is just a plaything, so it's more about the methods used. 'Learning by play' is a key concept in early years learning for a very good reason and I'm a big proponent of learning things this way, no matter how old we are. Okay, so what are we going to do? Well, see below for the end result and then we'll work it up step by step. This is for people already fairly familiar with QGIS, but you can probably follow it even if you're not.

The point of this exercise is mostly to demonstrate some methods, but first you need to grab some data from Natural Earth - just two layers are needed, plus one we'll make ourselves.

Make a 10 degree global lat/long grid by going via Vector > Research Tools > Create Grid... and then entering the settings you see below. Make sure you create a polygon grid, as shown in my screenshot and then once it appears in QGIS, drag it underneath the other layers in the Layers panel. You'll notice that the grid extent in the screenshot below goes from -180 to 180 in longitude and -90 to 90 in latitude. It doesn't matter if you see decimal places in the box, just be sure to use these numbers otherwise your grid won't cover the whole world.

Then we're going to want to duplicate the layers - as shown below - and then change the styles. We will have three copies of the places layer, two copies of the countries layer and two copies of the grid layer. I'll share the colour and style information below as well. Don't know how to duplicate a layer? Just right-click a layer on the left and hit Duplicate Layer. They won't look like what you see below (yet) with the colours and filters on them but we'll do that next.

There are three copies of the points layer. One is filtered to only show major world cities, and is represented by a square marker 2.0 size, 0.4 stroke width) with an upper case label and a semi-transparent background, with rounded corners. One is represented as spikes, based on population. And one is represented as fake shadows for the spikes. The spike and shadow layers use the QGIS Geometry Generator to convert the original point data to line data. See below for a screenshot of each layer's symbology.

To display only the cities you want, an easy way is to right-click a layer and use a filter (right-click > Filter...) and then here's what I used below to filter it, but you can add any cities you want of course, so long as they are in the dataset.

Note that I used two different rules here - the second one is a list of city names that are also recorded as having a 1 in the "worldcity" column in the attribute table for the layer, but then I also wanted to add a few more that weren't classified this way, so I added a few more using the first "name" IN rule. Note that I have sometimes put an x or a city name with XXX after it when I decide to hide a city that I previously wanted to be on the map. This is just to remind me of what I was doing. Confused? Then either take some time to understand it by looking closely at the text, OR, just copy and paste it in and then play around with adding and deleting places.

Okay, but how do you turn a point layer into spikes, or fake shadows? You use the Geometry Generator options in QGIS to do this, as shown below.

Here's the text you need to input for the spikes (below), which are based on the "pop_max" variable in our Natural Earth populated places shapefile. This makes a line from the points and the length is set to the value of the population, divided by 1 million. Why? Well, because the map units here are in degrees, and because the Tokyo metro area has about 35 million people, that means the biggest spike will be set to 35 degrees - if your dataset was in metres this would be too small and you wouldn't see any spike!

If you're unsure exactly where  to find the Geometry Generator option, just right-click a layer, go to Properties... > Symbology and then where it says Marker towards the top you should see Simple Marker below that. If you then select Simple Marker look below that to see Symbol layer type - which should say Simple Marker right now, and then change it to Geometry Generator. Then you'll be able to replicate the screenshot below and add the text you see in the bullet point.

I decided I'd quite like to have some fake shadows for the spikes on my map as well, so I used a similar approach to generate these - I just added an offset angle. Note that for the symbology on the shadows I made them 0.35 thick (compared to 0.15 for the actual spikes) and also 10% opacity, so they are quite faint and not too visually dominant. Here's the Geometry Generator text I used to create these, and note the screenshot of it below as well.

Obviously, these are fake spikes and you may not even want them, though that's not the point here. The point is just to demonstrate some of the capabilities with QGIS in relation to turning a point into a line, or any of the other Geometry Generator things you can do (e.g. simplify polygons, buffer, etc etc). Also note that this spike/shadow hack is not going to work if you change to a different kind of projection - e.g. anyone where the lines of longitude are not vertical - see below for a bit of Winkel Tripel!

Okay, that's the points layers - these were the trickiest ones so now let's look at the countries layers.

The use case I'm imagining here is where someone wants to produce a locator map, with some cities named and then a country highlighted. The spikes I added above is just a way to demonstrate how you can use the Geometry Generator options to do interesting things. For the countries, we have two layers, one of which is filtered to only show China (and this is China based on the definition of China in the Natural Earth dataset).

And that's how I styled the countries layers. Nothing very complicated at all, but the drop shadow just lifts the map off the page a little and adds to the 3D effect, for a bit of fun.

I decided to make the grid serve as a kind of canvas, as well as a geographical reference point, and I wanted to give it a drop shadow too. You can do this using only one layer with Draw effects but I found it works better using the drop shadow on a separate layer, so here's what I did.

Okay, great - we should now have a nice grid layer, some countries, China highlighted, city spikes and shadows, plus a number of city labels. Just a few more things and we're ready to export the final map.

I wanted the map background to be darker than the map canvas so I went to Project > Properties and on the General tab on the left I set the Background color to #5facbf. That's just a darker shade of blue.

To add the logo, which is an svg file, I went to View > Decorations > Image... and then added the logo that I downloaded from the QGIS website, although you can also just paste in the path or url into the Image path box (see below). You can add other image types but you'll probably find that svg gives the best output quality in your final map.

After that, all I did was make sure I'd zoomed out enough so that there was a bit of dark blue map canvas surrounding my whole world map. See below for a closer look at that. 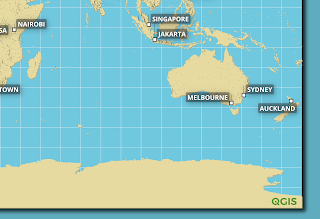 Step 8 - save your map as a high quality png file

We're not going to bother with the QGIS Print Layout here at all. Sometimes we don't need to and one of the great things that the QGIS team has done in recent years (among many, many things!) is add more options for exporting high quality images directly from the main map view. So, to export the final image you see below, I just went to Project > Import/Export > Export Map to Image... and then changed the Resolution to 300dpi and unticked the Append georeference information (embedded or via world file box because I don't need that file, but it's not a problem if you keep it ticked, it just generates a small extra file. Note you could just as easily copy and paste the map using the Copy to Clipboard button.

Obviously I haven't included every single little click, but there should be more than enough detail to replicate these methods if you have a basic familiarity with QGIS already. If you are left scratching your head though, please feel free to get in touch.