Each summer for the past few years I've experimented a little bit more with mapping techniques, so here I am again with another effort. You can see earlier ones on mapping marine traffic and shaded relief elsewhere on the blog but this time I've taken a little look at mapping rainfall. Well, it's mostly rain in the UK but of course to be accurate it's about all kinds of precipitation. But the effect I was playing around with also doubles as a kind of 'rain shadow map' effect and my first go was for the UK so rain definitely fits the bill here. Okay, let's start with a map of rainfall in Great Britain, below. This is a slightly edited version of one I already posted on twitter. Below that, you can see a new one for the contiguous United States, using the same style. The UK one only covers a short time period but the US one relates to 30 year averages. 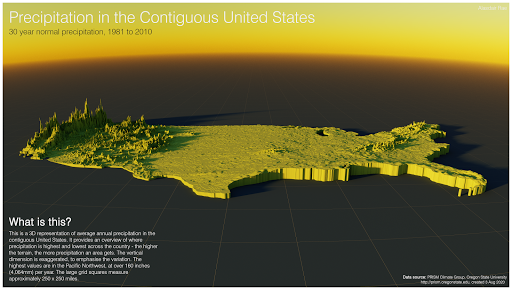 I've done quite a bit of this kind of 3D mapping recently and of course there are upsides as well as downsides to doing this but I think this does a pretty good job of highlighting the peaks in precipitation and also the general pattern across the areas shown. If you enlarge the images you should be able to see things in a lot more detail. The Great Britain map is based on a 1km grid and the US one is based on an 800m grid.
Here are some other versions of the same kind of thing, for the US and also for Northern Ireland.
Okay, that's basically it but see below for some information relating to data sources and software. These visuals are really just me experimenting with the method and I suppose I'd classify them as a mix of science and art (if I'm being charitable to myself) rather than useful analytical tools. But I do think they provide an interesting overview of climate patterns and there is potential here with this kind of technique to take it further both for climate data and other stuff.
Plus, I like the idea of 'rain shadow maps' that use actual shadows to show where the rain shadow effects might actually be felt.
Data sources
For the US maps I used data from the PRISM Climate Group at Oregon State University, and there are all sorts of great datasets available. The data in the map above is from the Normals section of their website and they have lots of great ready-made climate maps available to download.
For the UK (although it's provided as GB and NI separately) I used data from the Centre for Ecology and Hydrology. This is available under an Open Government Licence but I also need to cite the following source:
Tanguy, M.; Dixon, H.; Prosdocimi, I.; Morris, D.G.; Keller, V.D.J. (2019). Gridded estimates of daily and monthly areal rainfall for the United Kingdom (1890-2017) [CEH-GEAR]. NERC Environmental Information Data Centre. https://doi.org/10.5285/ee9ab43d-a4fe-4e73-afd5-cd4fc4c82556
Software
You may not be surprised to learn that these were produced in Aerialod. I did a bit of pre-processing in QGIS and some file compression in IrfanView but the visuals were rendered in Aerialod. I outputted the US ones at 5760x3240 pixels in about half an hour, once I got all the lighting and everything else just as I wanted. If you want to learn more about Aerialod, you can check out some of my earlier blogs on how to get started.