A few flow maps + data to play with

I've written a fair bit about mapping flows (e.g. migration, commuting) over the past decade or more and here I am again. The point of this post is to a) share some data so that anyone who wants to play with it can have a go; b) talk a little bit about visualising flows; and c) to look at the functional economic geography of England.

First of all, here's the underlying data - it's 2011 MSOA-to-MSOA commute data for England and Wales, which comes from the Census. Yes, it's getting quite old now but it's still a useful dataset. It's a big shapefile, with columns for total commute flow between LSOA and also different modes (train, bus etc) and some other stuff (e.g. distance, area codes and names).

Here are some of the maps I extracted from it. The lines are the commuting connections between places, with an addition blend mode added in QGIS, plus a scaling factor is used to make smaller flows dimmer and larger flows brighter. I've filtered the dataset to show only MSOA-MSOA flows of 10 or greater, otherwise it's a total mess. Here are some of the maps. 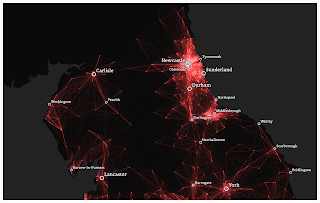 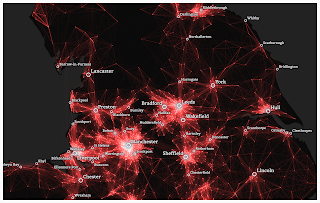 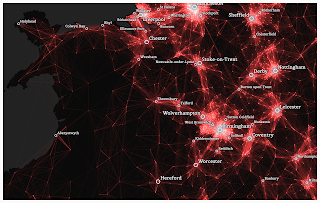 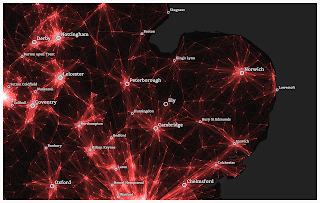 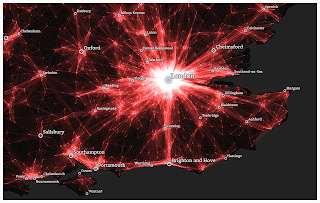 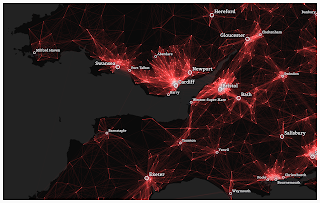 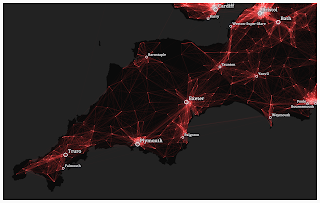 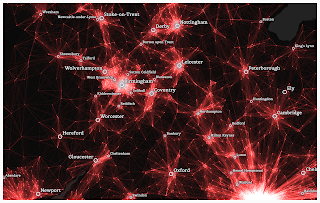 Okay, lots of shiny maps to see. With the opacity of the lines set to reflect the volume of the flows you get a slightly better overview of commute patterns. The addition blend mode gives the shiny effect, which is in some ways just a bit fancy but actually it serves a purpose here: making the main economic centres brighter, which fits in well with the underlying economic geography of England and Wales.

Talking of the functional economic geography of England more broadly, there are connections to my previous work with Garrett Nelson on US megaregions (e.g. our interactive map site, with similar shiny maps but driven by an algorithmic partitioning process) and you can get a sense of where the break points are between different areas.

Talking of which, if you're interested in this kind of thing, check out the AMA Garrett and I did on Reddit about the US commute work as part of the PLOS Science Wednesday series. The comments here are pretty interesting, particularly those from commuters about where they draw the line themselves between travelling to city A vs city B.

That's all for today - feel free to download the data and have a play, use the maps as you see fit, or get back to me with any questions or suggestions.

Oh, and if you do download the dataset, you'll also see that I have added origin an destination codes and names for MSOAs and local authorities. This is useful if you want to, for example, only look at all flows into Manchester, or all flows between Leeds and Bradford.


Data notes: MSOAs are small geogaphic areas with between 5,000 and 15,000 people in them, or between 2,000 and 6,000 households. Most have about 8,000 people and 95% of MSOAs had a population of between 5,443 and 11,579 at the time of this dataset is from. Want to know how to do this in QGIS? See my flow map tutorial from a few years ago. Want to know more about the glow effect? See this tutorial on glowing lines in QGIS. And the place labels? I put together a single file of Great Britain place names if you want to use that. I've used a couple of rules on which places to display, plus added some in manually. Thanks to Allan Walker and Richard Mann for making me think a bit more about this again.