As part of some work I'm doing for a 'fracturing societies' seminar this summer, I've been thinking about the spatial manifestation of inequality in England. Some places will always be rich and some always poor - if we're defining it relatively - but the location of these places, their characteristics and their wider neighbourhoods may all differ significantly. That's one of the reasons I made a 10% most/least deprived interactive map last week and shared it online.

This then raised the question in my mind of how many of the 10% most deprived areas in England neighbour areas among the 10% least deprived. In part, this was inspired by the famous image of São Paulo rich and poor taken by Tuca Vieira in 2007 and widely circulated since then (see below). The photo shows the favela of Paraisópolis on the left, right next to the upscale Morumbi neighbourhood over the wall. You can't really imagine a more stark divide. For more on this, see Teresa Caldeira's article from LSE Cities.

In England, things are not quite as extreme as this example, but there is quite significant socio-spatial inequality nonetheless, as documented over the past few years by many observers, including the SASI research group here in Sheffield. It matters for many reasons, but life chances, health, opportunity and education are just a few of the major advantages/disadvantages experienced by people on either side of the rich/poor divide.


The answer to my original question of how many of the 10% most deprived areas in England have a neighbouring area in the 10% least deprived is, I found, 75. I set about investigating further and here's what I found. You can see all the maps here but below I've provided a few examples to illustrate my points.

The most deprived area in England with a 10% least deprived neighbour is in Birmingham. On each map I've added in the LSOA name at the top, in addition to the LSOA ranks of the areas in question - as you can see here the one in Birmingham is ranked 38 out of 32,844 so it's right at the very most deprived end of the spectrum. But you can also see that the relationship with the neighouring area isn't like the example from São Paulo above. It's just more a feature of the way the boundaries are drawn. This is the case in quite a lot of the areas, but not all.


One area that's a bit different and where the most and least deprived are almost literally next door is in Gateshead. On one side of the road we have one of the most deprived areas in England right next to one of the least deprived over the other side. Mind you, the location of people within these is still not exactly of the 'cheek-by-jowl' category we see in São Paulo. Most local authorities don't have any areas with 10% most/least neighbours, but Kettering has three, one of which you can see below.


More striking examples of areas where people live next door but in opposite ends of the deprivation spectrum can be found in Leicester, Norwich, Nottingham and Swindon - see below. 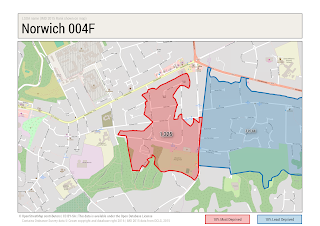 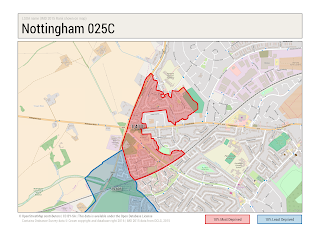 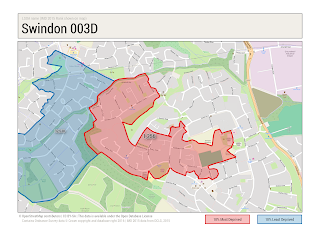 The Indices of Deprivation 2015 which I used to map the 10% most and least deprived areas do not measure affluence but the areas in the least deprived 10% are significantly wealthier, healthier and have lower crime rates - among many other differences - so it's a pretty reasonable proxy for affluence in many respects.

All of this raises the vexed 'so what' question once more. Is spatial inequality worse when you can see it? Is it worse, or somehow more grotesque, when rich and poor live side-by-side? Wasn't that what the 'mixed communities' policies of the 2000s were all about? Well, sort of but not really.

There is a mix of things going on here to create these patterns - sometimes it's housebuilding on brownfield land, sometimes there are physical or artificial features dividing neighbouring areas such as rivers, roads or railway lines, sometimes it's a boundary effect and the people in households aren't really neighbours. Either way, I find it very interesting and troubling at the same time. The plan is to keep working on this. I know it's not exactly São Paulo levels of contrast, but the big gaps between places - and particularly the life chances of young people - are really important.

Click on the image below to see all the maps.